There are two basic types of semiconductor material, called positive (or P type) and negative (or N type). In a PV cell, flat pieces of these materials are placed together, and the physical boundary between them is called the P-N junction. The device is constructed in such a way that the junction can be exposed to visible light, IR, or UV. When such radiation strikes the P-N junction, a voltage difference is produced between the P type and N type materials. Electrodes connected to the semiconductor layers allow current to be drawn from the device. Typically, 60 or 72 interconnected PV cells make up a single solar module measuring approx. 1 x 1.6 -> 1.9 m.

Modules are connected in series to form a string and one or more strings are connected in parallel to form a solar array. One of the major advantages of PV is the fact that it’s non-polluting, requiring only space and a reasonably sunny climate to function. Another advantage is the fact that solar energy is unlimited. Once a PV system has been installed, it can provide energy at essentially no cost for years as it is virtually maintenance free. People have been using PV technology for years, a pocket calculator for example has a number of PV cells. NASA has been using and developing this technology for years, satellites and other space going bodies rely on this technology to produce the power in order to run. Over the past two decades, PV energy conversion efficiency has increased and the cost reduced to a point where it is now economical to use the technology to produce electricity for our homes and businesses.

The inverter is an electronic device that converts the DC electricity produced by the solar array into AC with the same voltage and frequency as the mains supply. The inverter also performs various safety functions, constantly monitoring the grid and switching off in the event of a fault or major fluctuation in mains supply. The output of the inverter feeds electricity directly into the building’s distribution board in addition to the mains supply from the grid. The solar electricity gets priority over grid power so the appliances in the building will use the free electricity generated from the solar PV system and any surplus power will be automatically exported to the grid.

On a sunny day, the power generated by the solar PV system reduces the amount of electricity that needs to be bought from the electricity supply company. On very sunny days, or at times when not many loads are turned on, the PV may generate more power than is needed in the building, and the surplus will be exported out into the grid or diverted to battery storage for reuse later.

Solar PV modules can be roof or ground mounted, ideally facing south and at a pitch angle of typically 35 degrees. PV systems with two or more arrays, facing east and some west also function effectively.

A selection of our PV installation’s over the past 10 years can be seen in the ” Projects” section.

This module combines the technical features of our standard module NeMo® 60 P such as a durable module structure and reliable performance with elegant aesthetics. The Black modules are available with power classes between 255 – 265 Wp and therefore showcase a module efficiency of up to 16.3%. Dimensions: 1640 x 991 x 38 mm […]

The standard module NeMo® 60 P is available with a power range between 250 – 270 wp and with this achieves a module efficiency of up to 16.6%. It is deemed to be our bestseller and offers an unbeatable price-performance ratio. Thanks to its compact design and excellent performance at weak light conditions this module is […]

We carry out a site assessment to check that proposed the location for the solar array are substantially free of shading and roofs are structurally sound to mount solar arrays on. In certain cases we can determine the future performance of a proposed installation using leading edge simulation software.

In cases where the proposed solar installation exceeds the planning exemption limits, we will prepare all documentation for a planning application, including photo montage illustrations and special environmental reports.

We utilise leading edge computer simulation software for optimum system design. Equipment is specified in compliance with industry standards and particular requirements of the installation site

We take responsibility for  installation of a solar PV system comprises of the following functions: Shipping and safe site unloading Roof and ground works Assembly of mounting frames and modules Installation of inverter(s) and ancillary electrical  switch gear Cabling and bonding Testing and commissioining

Solar PV requires very little maintenance over its service life, other than a routine visual check to ensure such items as mounting frames, cable and earth bonding connections are secure. The panels surface is self cleaning (rain water) when installed at a tilt angle of 10 degrees or more. 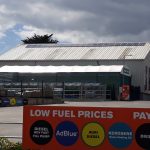 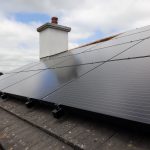 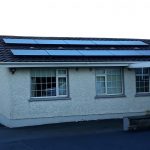 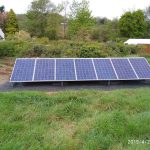 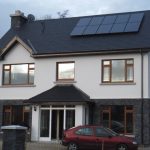 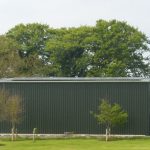 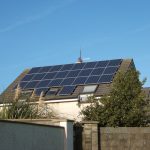 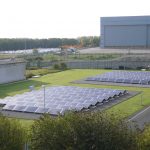 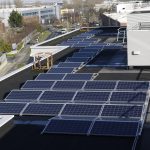 188 x 260 Wp modules installed on two flat roof levels and mounted on a ballasted Schletter mounting system. The modules are connected to the main distribution board via a 300 KW Freqcon grid stabiliser and battery storage system. 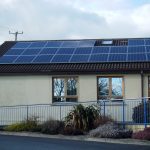